Treding on CPE; When the Culture Rubber Hits the Road.

Making a choice of Secondary School for your child, would you be prioritizing grooming in your local Nigerian culture, over certain other matters like infrastructure, etc??

How important is the Culture issue anyway? National diversities are many already as it were., before we begin to consider our different languages and cultures in Nigeria. It’s bad enough that we have 4 major ethnic groups, yet within these ethnic groups, are very many other tribes, dialects, and cultural differences, so much so that you find an ethnic group within which the multi tribes do not even understand each other. Communication, therefore, whether spoken or gesticulated and inferred by behavior, can become disjointed where a handshake can mean one thing in one village, and mean a totally different thing in another.

So there was this most interesting post about whether the Nigerian child should be made to ‘dobale’ in greeting or not to ‘dobale’, Yoruba or not.
This one had the Yorubas emphasizing the importance of propagating the indigenous cultures from generation to generation. They seemed to see it more as a sort of tribal branding, something to be proud of and to beat your chest over. 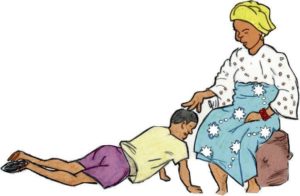 But more important is the message behind the ‘dobale’ and how the one who chooses to do the ‘dobale’, is generally perceived by the elders to whom he ‘dobales’, as respectful and well-bred, surmising that such a one, must be from a ‘good home’. 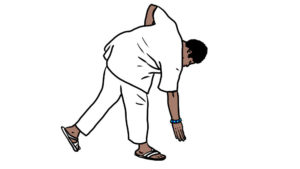 Incidentally, this art of stooping or kneeling to greet elders(for ladies), and prostrating flat on the ground, somewhat like a gymnastics press-ups move(for the men), is not particular to the Yoruba tribe alone.

Up North, if you’ve dealt with the indigenes, you’d witness how a younger man would stoop to greet an elder and unlike the Yoruba who would do it only for a brief meaningful moment and get up immediately, the Northerner would stay stooped low, until the elder stands and beckons him to stand also.

To do otherwise in these cultures would mean ‘disrespect’ and poor breeding. Quite frankly, it can lose your business and much favor.
On the other hand, a story was told about Ibo grandfathers who swore over their dead bodies that they’d rather die, that kneel or bow to any other fellow human. Bowing, kneeling and prostrating, was reserved only for their ‘Chi’, meaning, their God.

Where then does that leave grandchildren who were returning from Yoruba lands, having imbibed the ‘dobale’ culture?

This left the grey-haired elders chagrined and wondering what madness had befallen their seeds. “What sort of alien humility is this”?

From my own end, a story was told me of the rural TIVs, whom when a stranger goes to visit a Tiv man for an important meeting, you’d get to the said man’s home and while the meeting was in progress, the children in the man’s compound will walk right into the meeting and proceed to begin shaking hands with the adults in the meeting, one by one.

Very annoying if you’re a Yoruba man or even an IBO man. You would feel most insulted, yet the people would take it for haughtiness if you dared show the slightest disdain. Cross River State, for instance, has 18 local governments with at least 4 languages in each. And that’s Cross River whose major languages, Efik, isn’t even one of the 4 major Nigerian languages.

The sad part is that these indigenous smaller tribes, do not understand each other’s languages, thus their adoption of the pidgin English as lingua franca. Yet, not everyone can speak the pidgin English, apparently.

The general consensus though is that we should each be seen to proudly preserve our culture as our heritage. As much as we can, hand our children any skill at all we have in our coffers, the Culture skills inclusive.

Gist has it that there’s a limit to how far you can go abroad as a non-indigene. Many are returning to Nigeria, to seek investment opportunities, and guess what? The deals are being struck with kola nuts, and communication is being read in between the lines and body language is being watched closely. Meaning that those who return with technical skill but never learned the cultural vibes and inferences will lose the deals to those with less technical skill but more interpersonal/cultural understanding.

This is our own Naija Know Like and Trust Factor which works same for the Chinese, Indian, European, as it works for us Africans, and Nigerians precisely.

So, which Secondary Schools are poised to deliver well rounded cultural Education, besides every thing else?

Good luck as you make your choices…

BOARDING SCHOOL OR NOT; NO CASUAL DECISION

I discovered my purpose in teaching – EMA 2022 Award Winner

Child marriage can be discouraged by free education – Minister

Over 800,000 children displaced by recent flooding in Nigeria

BOARDING SCHOOL OR NOT; NO CASUAL DECISION

How to Spot A Good Secondary School

My Green Passport...Can I exchange it for any other????